Beijing is definitely a foodie paradise, which perfectly combined different type of cuisines around the nation, even around the world. You can have any foods you want in this culturally diverse city; also, you can easily find numerous traditional Beijing cuisines in this historical city.

In terms of traditional Beijing cuisines, I would definitely recommend the “Shaomai”, which is a steamed dumpling with the dough gathered at the top. Just like soup dumpling of Shanghai, Shaomai is sort of a specialty of Beijing. By serving the best Shaomai in Beijing, Duyichu is a “Must-try” restaurant in Beijing.

Located in a bustlingly boulevard called “Qianmen Dajie”, Duyichu is a well-known century-old restaurant in Beijing. Dating back to the year 1738, Duyichu originated in the 3rd year of Emperor Qianlong. There’s a local legend about Emperor Qianlong granting the name Duyichu to this once-nameless eatery, at around two-and-a-half centuries ago. Duyichu, means “the one and the best restaurant in the capital city” in Chinese. After that, an increasing number of Beijinger comes to the restaurant to view the signboard which signed by the Emperor Qianlong and to taste the food that had been praised by the Emperor. 275 years passed and the restaurant still attracts more and more people, both locals and foreigners.

Beijing-style shaomai is totally different with  the usual cantonese style we normally eat at hongkong teahouse .It looks quite different as these sack-shaped Shaomai have their edges ruffled with round rolling pins before they are stuffed with fillings. The Hong-Kong dim sum, however, looks simpler and more like a dumpling.

Prawn Shaomai. This is a fairly large shaomai and wrapped up in a thin lye-water flour wrapping.  The shaomai is shaped like an ancient chinese coin purse, with a twisted, semi-closed top.  The taste is quite amazing, full of prawns meat and other seafood fillings. Unlike the small Cantonese steamer that typically holds four Shaomai, one steamer here in Duyichu comes with ten Shaomais. 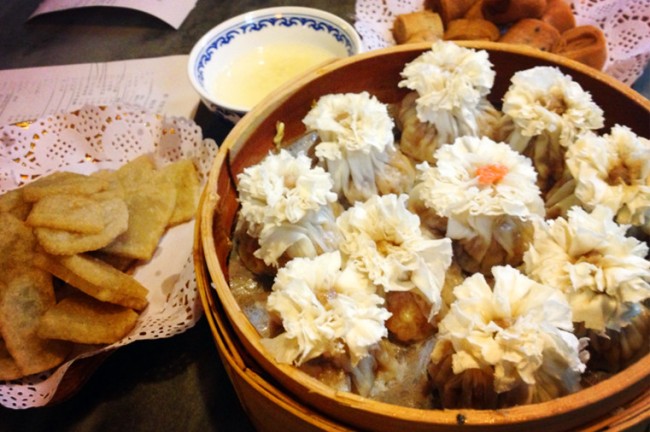 Vegetables Shaomai, it looks so beautiful, just like a lotus-flower. And it tastes amazing with full of veggies. Perfect for vegetarians.

Assorted Shaomai.  This one includes various Shaomai with different fillings, such as Pork and Leeks, Beef and Cilantro, Lamb, Vegetarian and the original recipe of “Sanxian” (which is combined pork, shrimp and sea cucumber).

Crab Roe Shaomai, which comes in its own little steamer. It looks quite exquisite and attractive. As Crab Meat and Roe is traditionally a Shanghainese speciality, it tastes remarkably similar to the Soup dumpling with Crab Roe of Shanghai.Of course, It has less soup and more meat than the Shanghainese version.

Qianlong Baicai , a much more traditional Beijing dish. It’s actually a plate of fresh, crispy Chinese cabbages blended with a thick sesame paste. The time-tested recipe had just the right amount of acidity for balancing the thickness of the sesame paste, and made it perfectly accompany with the thick-fleshed Shaomais.

Everything is worth a try, I bet you will love it!!❤